RPG Maker has a long history of letting anyone, regardless of skill level, make a game. And in Summer 2020, the latest and most powerful version, RPG Maker MZ will be available to help you make YOUR game.
With new features and enhancements to older features, this RPG Maker is set to become the best RPG Maker to date!

You will also later be able to purchase each of these DLC individually.

Every preorder RPG Maker MZ comes with a free key to RPG Maker MV, usable right away.
You can either start learning RPG Maker with MV while you wait for the release of MZ, or if you already own MV you can give it away to a friend.

【Bonus 3】10% discount off of RPG Maker MZ during preorder. And an additional 10% if you already have RPG Maker MV

※About Pre-purchasing RPG Maker MZ:
On transaction completion you will receive the files and key for RPG Maker MV and can use it right away. You will also receive the key to RPG Maker MZ which you can activate on Steam. However RPG Maker MZ files, and all the DLC files will only be delivered on the release date of RPG Maker MZ.

● Map Editor
With RPG Maker's map editor, you can create maps easier than you can draw a picture. Pick the tiles you want to use, and “paint” them on to your maps. With powerful enhancements from the previous RPG Maker’s map editor, and a large collection of new tiles, you can build countless towns and dungeons for your players to explore!.

▶ The Layer Function Returns!
An incredibly missed feature from RPG Maker XP returns with MZ! Map layer control has returned. You can now select which of the four map layers you are drawing onto, or leave it on Automatic to keep the behavior from MV. This gives you more control to make your maps look the way you want to, as well as speeding up the map creation process: No more having to redo an entire tile because you messed up one layer or want to change the base layer! 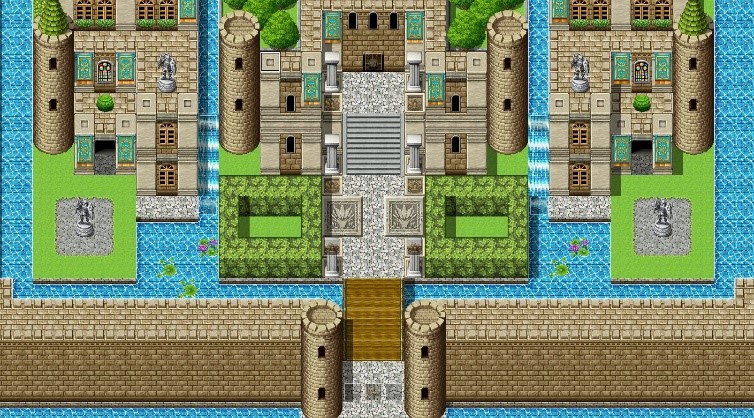 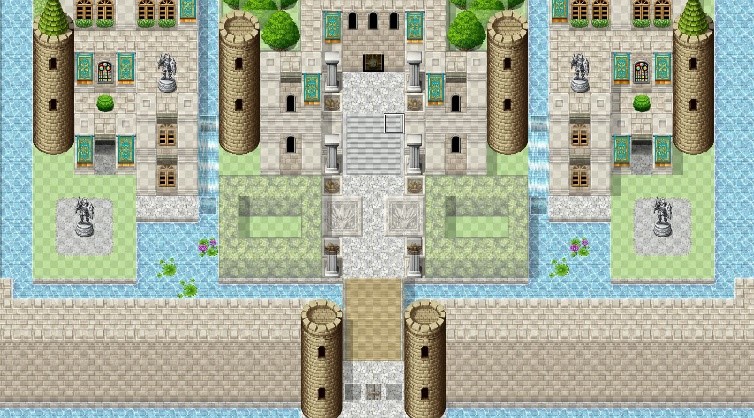 ▶ Map Trees can be Rearranged
You can now rearrange the Maps in the editor Map Tree even on the same tree level, making it easier than ever to organize your project for maximum efficiency.

▶ Improved Image Save Function
When saving maps using the built in editor function, they now save pixel perfect, rather than being resized!

● Character Generation
Not only can you use the included characters or import your own made completely from scratch, you can also create your own original characters using component pieces using the built in Character Generator! Combine hairs, eyes, clothes, accessories, and more. Recolor them to match your vision. 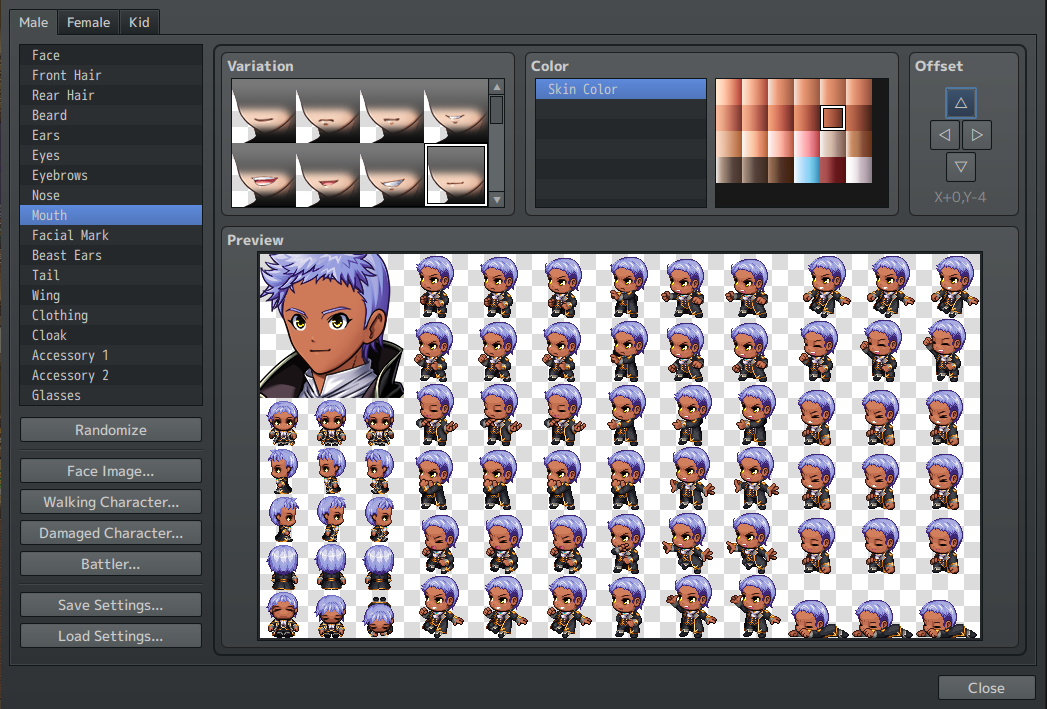 ▶ Adjust Component Positioning
You can now use the offset feature in the Character Generator to adjust the placemnent of generator pieces, giving you greater control over the look of your heroes, villains, and NPCs!

▶ Add New Color Palettes
You can now go beyond the existing color palettes: add your own palettes for recoloring hair, clothes, and more!

● A Trove of Assets Included
From face graphics, character sprites, to map chips, character generator components, music, and sound effects, and more, RPG Maker MZ boasts the largest collection of assets out of the box than any RPG Maker in the series history! 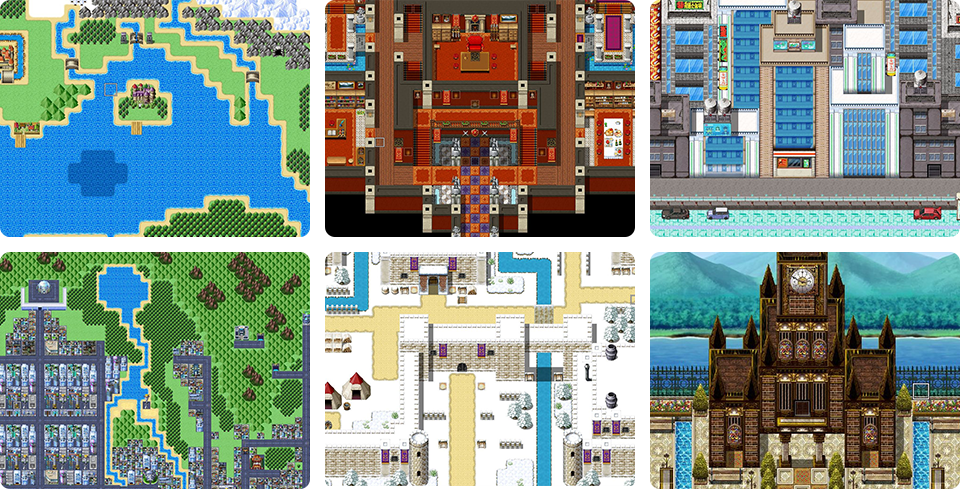 ● Database
The database is where the heart of your RPG Maker game resides. Here you store the information defining your characters, their skills, equipment, classes, but also their foes! Also in the database will be where you define many things about your game, like the names of stats, what conditions your characters can be afflicted with, battle animations, and more.

▶ New Battle System Added!
With RPG Maker MZ, in addition to the front and side-view options that existed in previous RPG Makers, we've added a brand new option!
The Time Progress Battle System will unchain your game from traditional turns, allowing every character to act at their own speed based on their stats and conditions. 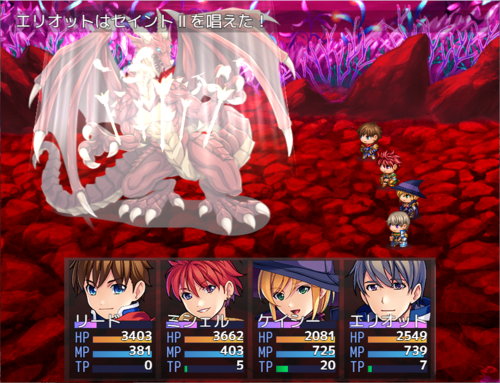 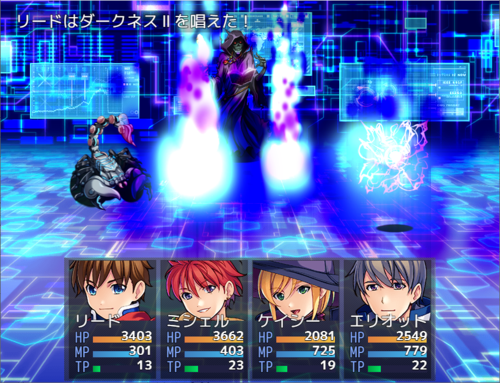 ● Events
The Event system covers all the many NPCs, treasure chests, puzzles and everything else your players will interact with in your game. Using a simple system of menus, you can create a complex series of events that will drive your game to its conclusion. All with no programming knowledge required!

▶ Preview Added for Movement Route Settings!
When setting up events, now you can check movement routes using a preview.

● Animation
With RPG Maker MZ, our Animations function has been completely revamped. Easily create huge fireballs, dynamic sword slashes, or freezing winds for your characters to unleash… and suffer.

Due to popular demand, we have now included support for particle effects using Effekseer*, an open source particle effect creation tool!
With this new feature, you can create magnificent 2D and 3D animations without having to use clunky spritesheets, making it infinitely easier to make extremely dynamic battle animations! 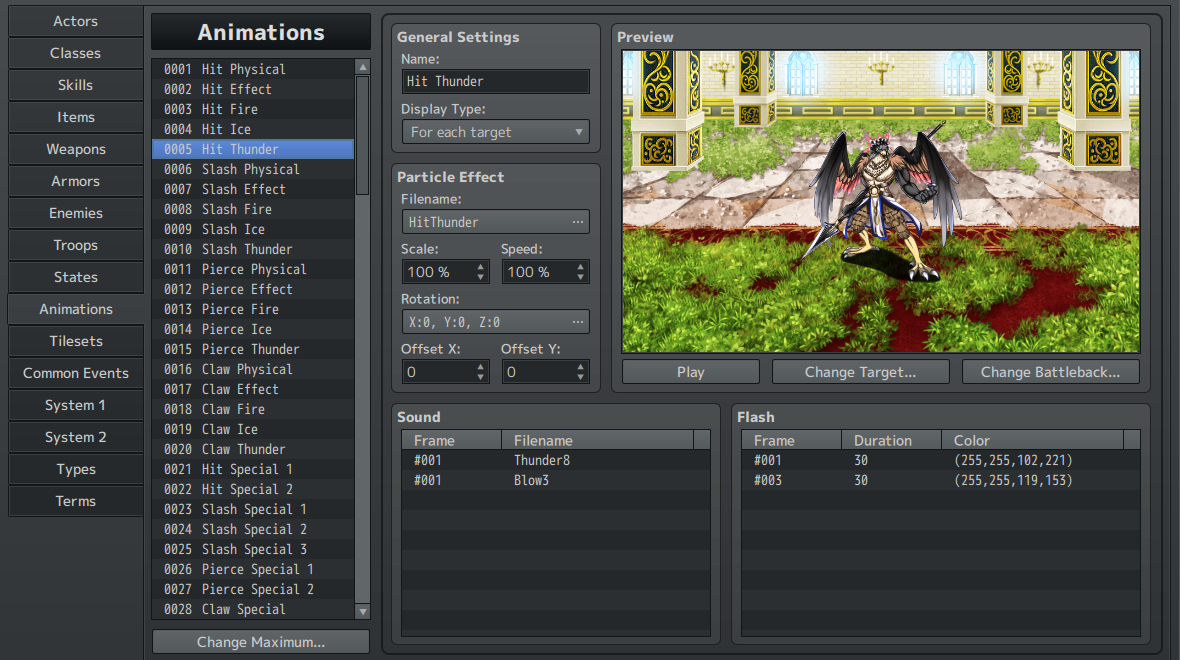 ● Plug-ins
Sometimes, you want to go beyond what is easy to do with eventing alone. That is when Plugins come in! Plugins are bits of code that can change almost anything in your RPG Maker game. Learn to code enough to make some yourself, or find ones made by others to bolster your game. Adding an existing plugin can be as easy as plugging it in!

▶ Revamped Plug-in Commands
It's now possible to select a plug-in name and command name from a pull-down menu rather than having to enter it from text. Additionally, you can easily pass parameters to the Plugin Command requires with a simple menu system. 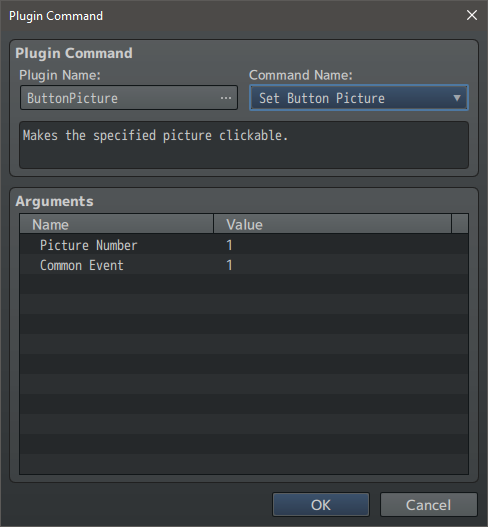 ▶ Plugin Management Made Even Easier
Turn Plugins On/Off from the base Plugin Manager Screen, Easily find the plugin creator's website with the new URL field in the Edit Screen, and be sure that your plugins have all the requirements and are in the correct order with the new error messages.

● Playing a Game
RPG Maker MZ makes it much easier for users to play games!

▶ Auto-save Function Added
Auto-save and separate auto-save slots have been added to the default functionality of the Engine! This option can be turned on and off in the Editor for your game.

▶ Better UI For Mouse and Touchscreeens
The UI has been completely revamped to more comfortable and more intuitive for mouse and touchscreen control! 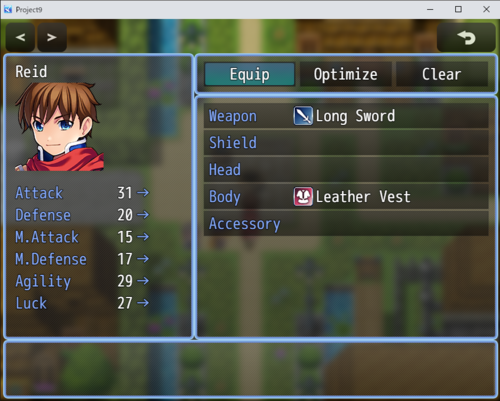